Enemies are a game play feature in Carrion.

The enemies in Carrion are diverse and range from terrified humans and their cybernetic guardians to relentless mechanical entities hellbent on the player's annihilation. Carrion rewards players who are wily and insidious enough by allowing the player to turn these mechanical creations against their makers through the use of parasitism and cleverly laid traps.

Easily killed, occasionally armed with pistols. Can be used for parasitism (provided they are still in one piece, whether dead or alive), and are the only enemies that can be consumed for biomass. They typically flee from the player if unequipped. May be dangerous to the player in significant numbers if armed. Vulnerable to most attacks. Stunned or killed by environmental weaponry. Each fully consumed human provides 2 biomass.

There are many types of humans, however these are mostly just for aesthetics:

When using parasitism against a human, the player can use them to move between places that they cannot access directly. By doing so, they consume the original host, and the player will appear where the human last was.

Tougher 'humanoid' enemies, which come equipped with electrified shields and either a machine gun or a flamethrower. Yield no bio-mass, but are vulnerable to parasitism postmortem. They cannot be grabbed from the direction the shield is facing, but they are vulnerable to rear, overhead and ambush tactics, environmental attacks, keratin spikes, and tentacle barrage.

Those armed with flamethrowers are extremely dangerous, as the player will continue to take damage until they are completely submerged in water. Flamethrower equipped Soldiers are distinguishable by their brown trousers, as opposed to regular Soldiers who wear white all across.

In the Greatest Time of Year DLC, a third type of Soldier is added, distinguished by their blue clothing. These soldiers carry shotguns which are devastating at close range. A single blast can often knock humans and other soldiers off their feet, and at particularly close range they can even destroy mechs before they have the opportunity to return fire, making these soldiers excellent targets for parasitism.

Soldiers are the sole enemy type that may be carried between screens without being consumed. Attached to the Solider's clothing is a series of red lights which act as life detectors, glowing steady when the Soldier is in good health, flashing when they are low on health and turning black when the Soldier's life signal ceases.

Orb like drones which come equipped with pulse weaponry, shielding and laser detection devices. They are capable of high speeds and have a 360 degree line of sight at all times, rendering ambush tactics largely ineffective. However, once they detect the monster they will commit their shield and weapon in that direction for a brief time, and for a short window after that they will be completely defenseless.

They are extremely vulnerable to the prehensile tentacle when emerging from their chambers, but once they are deployed players can bait their attack, then circle around and grab them from another direction or grab them immediately after an attack. Alternatively, any attack that penetrates a cyborg's shields will do the same for a sentinel's, though using these methods may leave the monster in the line of fire.

Armoured walkers crewed by humans, and later in the game Soldiers, which come equipped with assault cannons. Holographic targeting devices appear when searching for the player. To disable them, the player must rip off their armor, the cage surrounding the pilot, and finally remove the pilot itself. Due to their resilience and immense firepower, frontal assaults are all but suicidal, but they are vulnerable to rear, overhead and ambush tactics, provided the player escapes quickly after their first two attacks.

If the pilot is removed but not killed, they will attempt to path-find back to the mechs provided that it isn't destroyed. To destroy a mechs beyond use, the player can use the Xiphorrhea charge or a Harpagorrhea harpoon barrage on one that is already heavily damaged.

When sufficiently damaged, but not destroyed, the walker pilot will be exposed and therefore vulnerable to parasitism while still using the damaged mech, giving the player direct and immediate control of the mech itself, albeit in a less than optimal condition.

Unarmed surveillance devices capable of damaging the player with their propellers and move at high speed. Typically found in groups of 4. Vulnerable to web shot, keratin spikes, Harpagorrhea harpoons and subsequent environmental damage.

Turrets come in two main varieties: pulse turrets which act as typical projectile weaponry and concussion lances which will kill the player outright if the keratin armour ability is not used prior to the detonation occurring. In some circumstances, the concussion lance is required to destroy obstacles which the player would be otherwise incapable of destroying themselves. They cannot be destroyed, but many can be deactivated with a nearby switch. It should also be noted that the concussion lance is capable of latching onto npcs, although areas where the two are in proximity are rare. 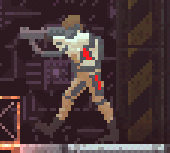 A Soldier equipped with a Flamethrower. Note the differently shaped weapon and the brown trousers and helmet which distinguish them from default Soldiers.

A damaged Dreadnought with its cockpit torn off. 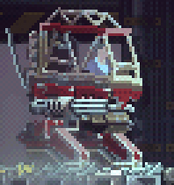 A manned Dreadnought with its armour torn off, revealing the pilot. 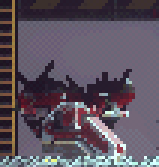 One of the mysterious tanks that unleash Drones when they detect the monster
Community content is available under CC-BY-SA unless otherwise noted.
Advertisement